In this new year, we welcomed to the Moorea Sea turtle care center some Tetiaroa turtles hatchlings, that unfortunately were too weak when getting out of the nest, thanks to the support and authorization of the Direction of the Environment of French Polynesia.

The nest was poorly placed in the shade in a damp place with bad quality sand. Some baby turtles were able to be released directly, but unfortunately others were unable to reach the ocean.

Transferred to the Sea turtle care center, a few hatchlings survived and are now feeding on small pieces of fish. Placed in individual basins for optimal rest, their health condition improves little by little. A weight gain of 12g to 15g and about 1cm for each individual, which seems very futile but which, for an animal born at a weight of 20g and measuring 4cm, represents a lot!

Our teams take turns working alongside them on a daily basis to maximize their chances of survival. 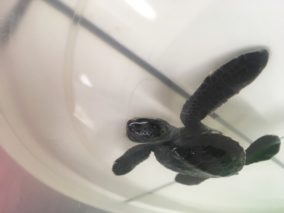