On Sunday, March 4th, the reporter of the CBS Early Show and the lucky winner of the All Access Tahiti VIP Tour were in Moorea for a weekend of filming. After meeting the dolphins of the Moorea Dolphin Center, they visited Tetiaroa, an atoll nearby Tahiti, guided by Teihotu Brando who lives there. Cécile Gaspar, […] 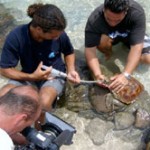 Te mana o te moana participated in a documentary footage for Ushuaia TV. On November 29th and December 1st, they covered two topics: one on the sea turtle clinic, the other one on a sting ray research component using acoustic tagging. The turtles footage included the release of one of them, an animal that had […]