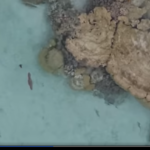 Thanks to a drone survey after a green sea turtle nest hatching on Tetiaroa, we were able to capture images of predation… by an octopus! A first for our team that up to now had been able to film predation by sharks and big fishes’ predation but never by a cephalopod. Watch by following the […]

On October 12, we released two green turtles. Muto’i (“police officer” in Tahitian) is a green turtle that was seized last August by the gendarmes of Moorea in an individual where she waited returned on the back before being cooked. She was at the side of another turtle, of which only the plastron (underside of […]