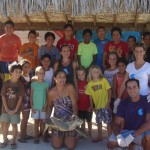 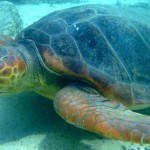 On April 2013, the Sea turtle Clinic welcomed for the first time a loggerhead turtle. Since the beginning of the foundation, the Clinic usually welcomes Green turtle, Hawksbill one’s and rarely Olive ridley turtles. This specy is one of the five species encountered in French Polynesia but it’s not so usual to see her. Found […]

Jean-Michel COUSTEAU, is the Ambassador of  te mana o te moana since 2008 and he just participated to the release of a young rehabilitated green sea turtle he called “here” love in Tahitian… He also supports the two Observatories started by the foundation on Polynesian sea turtles and marine mammals… see youtube video