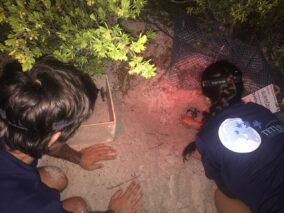 Te mana o te moana’s teams located on the island of Tetiaroa observed the first green sea turtle laying of the season on August 16th on Onetahi motu. On the atoll throughout the laying season, the biologists and volunteers of our foundation have as a main mission to account for female traces in the sand, to identify laying females, to confirm the nests and finally to make an inventory of the number of hatchlings that came out of the nest and of the total number of laid eggs (some of them do not hatch).
Also, when necessary, the teams protect the nests from predators and provide assistance to hatchlings when they are stuck in the sand or have sustained injuries.

Since the start of the 2020-2021 season, which will continue until April 2021, more than 189 laying female traces have been identified on Tetiaroa atoll. 87 nests were confirmed and 5 hatchings were successful. On the atoll, the observed average number of eggs per nest is 80. 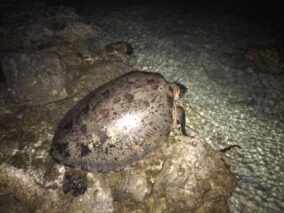 Satellite monitoring recording turtle movements which were carried out in previous years with the installation of beacons showed their long migration after the laying phase. Turtles were recorded reaching the Fijian waters and returning to mate and lay again on Tetiaroa after 3 to 5 years.

These studies provide a better understanding of the green sea turtle life cycle and is a valuable aid for the development of recommendations on protective measures. 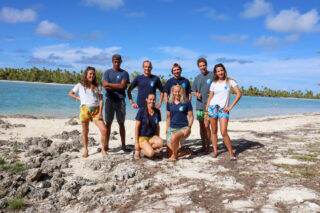