Thanks to the NOAA Agency and the Direction of the Environment of French Polynesia, our loggerhead turtle “Ariti” released on May 2013 is giving her last positions. Afeter having travelled more than 23 600 kilometers, she seems to come back to French Polynesia….. We will see when recieving the next one positions… follow her adventure […] 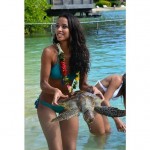 In June 2014, the team of Te mana o te moana welcomed Miss France 2014 Miss Flora Coquerel and also Marine Lorphelin et Mahiata Riaria (Miss Tahiti 2013).  They came to celebrate the Miss Tahiti 2014 edition. To show their involvment in the non profit foundation, they participated to the release of  Miti, a sea […] 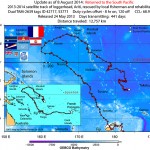 Breaking news : The last map from Ariti relased on May 23rd has been just received. In a little bit more than year, sher has travelled 12 757 kilometers from her departure from Tahit. Retrouvez toutes les actualités de Ariti en cliquant ici.

Fofo, recalled “Bingo” for the day, is the 132 sea turtle released by the Sea turtle Clinic of Moorea. Welcomed on February 12th, 2012, this baby green turtle has been found blocked into the nest during the nest monitoring campain realized by the team on the atoll of Tetiaroa. After a little bit less than […] 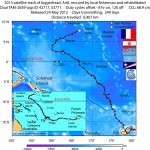 Ariti, the loggerhead turtle released on May 2013 (for those who are not already following her travel) is now in the North Pacific. She has continued northward and is now in the Marshall Islands in the vicinity of (but not within) Namu Atoll. This project is conducted thanks to the partnership with the NOAA entity […]